Who Is Ready For Some College Football 2019?

bjschil said:
How ‘Bout them Badgers. A GREAT win,
Click to expand...

It sounded dominant. Ed and I were keeping track of it during Bama game.

Georgia and Notre Dame ended up being good one as well. I was expecting Georgia to walk off with it but ND kept it close.

Apparently we broke Houston. Their QB and a WR decided to not play any more this season to preserve their redshirt and enter the transfer portal.

They then said they were still going to play at Houston next year. So, either they’re leaving, or their punting on this season to try again next year.

Another hot day in T-Town.

BamaEd was the gracious host as always. I brought some ribs, beans, and potato salad. Ed cooked up a knockout of a dessert to go with it.

Ole Miss played them tough as they usually do. This game is a often matchup for myself and DW. She is the Ole Miss fan.

Next weekend is off weekend for Alabama and we are Gulf State Park bound for camping.
Last edited: Sep 29, 2019

Lots and lots of work to do here, need some better people on the offensive line, few better defensive backs. Well, some other coaches and ADs run the program so far into the ground, it's going to take a little while. Too bad some fans think it can be completely turned around in 2 years.
W

Tulane had a 42-21 lead on Army with about 6 minutes left. We then started looking like Tulane and the game ended 42-33.

Given that we were without our nose tackle that was disruptive against Auburn, we did a really good job of stopping the option.

A win is a win, Pluto. Take it and move on to next week.

I was at a convention over the weekend and couldn't watch any tv but did follow the progress of the Aub-Fl game on the CBS Sports app.

Bama had a bye week last Saturday and plays aTm this weekend in College Station as the afternoon CBS game.

Another great night in T Town. Bama hosted tennessee which is a big rival. BamaEd great host as always and I brought my BIL (a TN fan) along with us.

New lighting system is awsome. Ed posted a video of it above.

We listed starting QB for maybe 2 weeks. We found a punter however. Not only can he kick, he tackles like a linebacker too.

Traditionally the winners of this game smoke victory cigars. Of course, the football stadium is no smoking, so when the game was well in hand finally....that's not cigar I smell is it?

Well, okay, I guess they can.

Thanks for uploading the pix, tiggerdad.

Yes, there are signs in the stadium concourse that Bryant Denny Stadium is a no smoking facility.

The tradition is that you wait till the game is over and victory is assured but as shown above, EVERYONE jumped the gun and lit 'em up.

Oh it started as a locker room tradition back in the 60s IIRC when Bama beats 10RC.

So the players (Tua on right) partake. 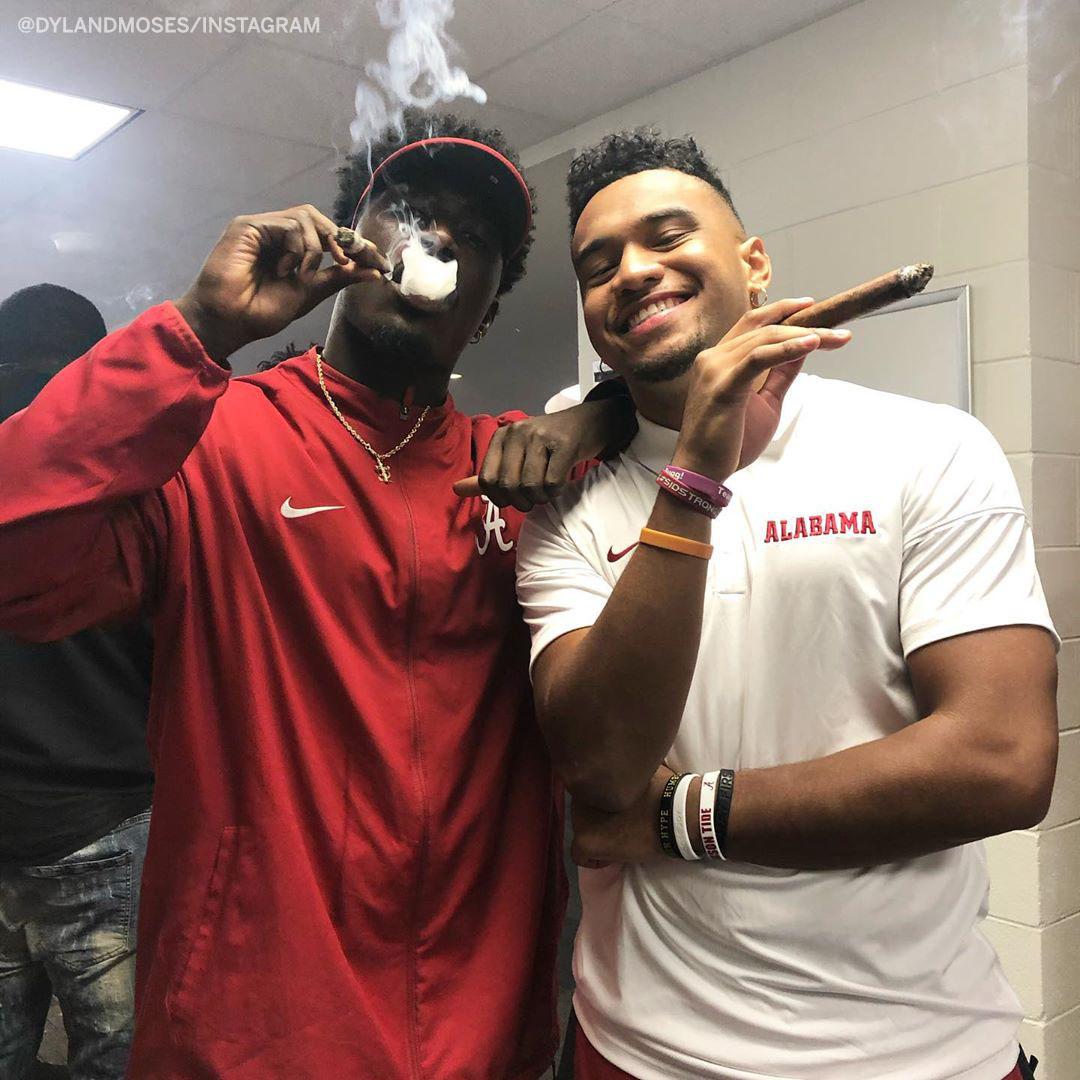 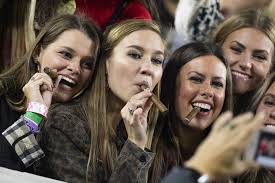 Even the ESPN sideline reporters partake. 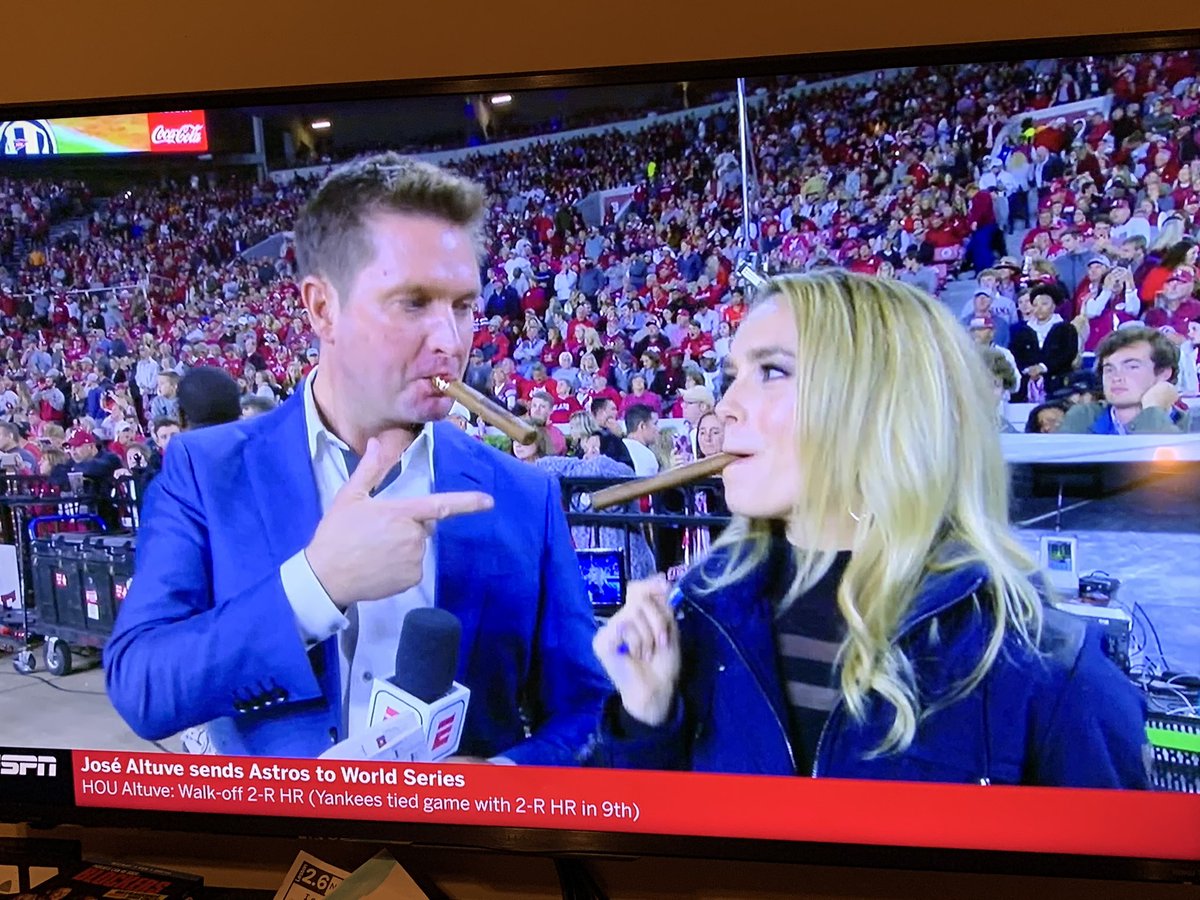 I prefer the fragrant aroma of 2nd hand cigar smoke. But one of these years I'll do it.

Michael, great to have y'all over.

I’m in houston for work so went and checked out the Houston SMU game tonight. Turned into a really entertaining game.
W

Tulane held off Tulsa (and our own penalties) for homecoming to get to six wins and become bowl eligible in consecutive seasons since ‘97-‘98 (but the ‘97 team didn’t make a bowl with a 7-4 record). So it’ll be our first time playing in bowls in consecutive years since ‘79-‘80.

WeLovePluto said:
Tulane held off Tulsa (and our own penalties) for homecoming to get to six wins and become bowl eligible in consecutive seasons since ‘97-‘98 (but the ‘97 team didn’t make a bowl with a 7-4 record). So it’ll be our first time playing in bowls in consecutive years since ‘79-‘80.
Click to expand...

Good for them, Pluto.

For those teams that qualify for a bowl game early in the bowl season, if I were on the team I'd want to go to a Florida bowl. Any bowl in Florida.

I remember a few years ago the University of Louisiana-Lafayette qualified for a bowl game and played in .... the New Orleans bowl. That's not very far from home so if I had been on the ULL squad, I would have been disappointed to not go further from home (but still happy for the post-season experience and swag).

Tulane plays in the American Athletic Conference and they have tie-ins with bowl games in Florida: Cure Bowl in Orlando, Charibundi Boca Raton Bowl in Boca, Bad Boy Mowers Gasparilla Bowl in Tampa, among other so their chances of a Florida tan are good.

Watch out, though, for the dreaded Birmingham Bowl (an hour from the house) which is AAC vs SEC. That one might be worth turning down. Seriously. Don't accept it.

Too bad the AAC doesn't have the tie-in with the Bahamas Bowl. I watch that game every year just for the tourism commercials and Atlantis resort ads.

I will follow where the Green Wave ends up with interest.

Glad for your team and your fellow fans.

ULL played in the New Orleans bowl several years in a row because it was the only? tie in with the sun belt. In 2013 we played them in it. In our home stadium. In some ways it was good, as it was our first bowl game since 2002 (Hawaii). So it was our first reasonable trip since 1998s Liberty bowl to cap our undefeated season.

Last year we played in the Cure Bowl in Orlando also against ULL, so we took the kids, got a magic kingdom day in, and went to the bowl game the next day.

Add in an independence bowl against Washington in 1987 when Mack Brown was our coach, and you now have the entire Tulane bowl history of my lifetime.


Though we still have more SEC championships than Mississippi State.

WeLovePluto said:
Though we still have more SEC championships than Mississippi State.
Click to expand...

WeLovePluto said:
Though we still have more SEC championships than Mississippi State.
Click to expand...

Being originally from T. Town and being an Alabama fan, but living in Mississippi, I really gotta say...

POTUS is coming to the Bama-LSU game Saturday.

Lawdy, I hope it doesn't take three hours for me to get through security to my seat.

bama_ed said:
Lawdy, I hope it doesn't take three hours for me to get through security to my seat.

Best of luck getting into the stadium tomorrow.

Well the new lights at Alabama's stadium are cool. Sadly they did not help today versus LSU. Was a heck of a game to watch, very enjoyable.

PaHunter said:
Well the new lights at Alabama's stadium are cool. Sadly they did not help today versus LSU. Was a heck of a game to watch, very enjoyable.
Click to expand...

Yeah Chris, we dug too big a hole for ourselves in the first half. Burrow's ability to run at times was the difference in the game IMO. I can support LSU the rest of the way if we end up out of the playoffs.

PS - but on the bright side, I sold a pair of tickets for $400 each on StubHub so I can put that cash toward my DISMeet campsite. Then Dad and I used the other pair.
Last edited: Nov 9, 2019

Oh man, horrible first half doesn't even begin to cover it. Outside of a kick return for TD and long TD pass, Bama looked horrible. 2nd half was completely different story, but as Ed said, too big of a hole to dig out of by that point.

I strongly feel Burrows should be the Heisman winner barring something terrible happening.

I'll support LSU from this point out, however, with Bama keeping it close, and PSU losing today, if Bama wins out and so does LSU, then Bama has a real chance of making it into the playoffs.